Another Lost Treasure and Thoughts about Dinosaurs 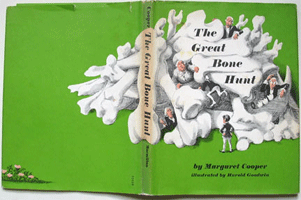 I've been going through boxes and shelves of books lately, trying to clear books out so we have room to move in our house full of books. I came across a book inscribed to my brother from my Uncle Wally, Aunt Celia, and cousins John, Kate and Elsbeth, Xmas, 1967 (sadly, Elsbeth died of a brain tumor at age 6 in April 1968). The book looked fun and I put it aside to save for my brother. When I mentioned it to him, he was blown away. I had found one of his lost treasures of childhood. That book was The Great Bone Hunt, by Margaret Cooper (New York: Macmillan, 1967).

He prodded me to retrieve it from the bottom of a pile and happily settled down to read it. Afterwards he rather ruefully admitted that the story had gotten mixed up in his memory. He remembered it as a story about the discovery of dinosaur bones in the 19th century in England, and thought it had an illustration of a dinner at the Crystal Palace in 1851 in the midst of a dinosaur skeleton. Nooo. The book is actually the story of the discovery and reconstruction of mammoth skeletons by Charles Willson Peale in America in 1801. The illustrations by Harold Goodwin are delightful. There is even an author's note at the end that reproduces Peale's painting of the excavation of the skeletons. I read the book myself that night with great pleasure though I did not remember it from our childhood. My brother was the one who adored dinosaurs and science in general. I was the poet, dreamer, and writer in the family. Funnily enough, we both ended up as historians...

When he told me about his mixing up the story of the Great Bone Hunt, I immediately recalled hearing of a book about the dinosaur skeletons and reconstructions at the Crystal Palace of 1851. That was Barbara Kerley's The Dinosaurs of Waterhouse Hawkins, illustrated by Brian Selznick (Scholastic, 2001). Perhaps he read it to his children and thus the story got mixed up with his childhood memory? It even includes illustrations of the dinner party in a skeleton. Here's an article about the history behind the book. The Academy of Natural Sciences in Philadelphia holds an 1872 scrapbook album by Hawkins, which includes a formal invitation to that dinner and an illustration of it. 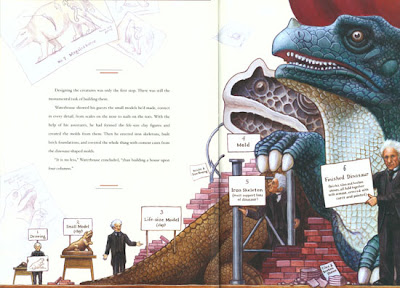 The passing down of passions is interesting. My father, born in 1933, was fascinated with dinosaurs as a young boy, and managed to pass that passion on to my brother, who passed it along to his son and daughter. Everytime they visit Chicago, we go off to the Field Museum to see Sue and other dinosaurs. They adore museums so we visit every big exhibit that is open during their visits.

I wish I could share with them a recent discovery sometime soon. This summer at the Children's Literature Association Conference in Normal, Illinois, the illustrator Eric Rohmann gave a talk in ISU's library. He was wonderful. If any of you have a chance to hear him talk, run, do not walk, to hear him! He talked about illustrating and the talks he gives to school children. He drew on a whiteboard, in response to suggestions from the audience. At one point he drew what looked like a pig sinking into quicksand and I said so. He laughed and drew additional curves to make that clearer. After his talk, there was a long, long line to buy his books for him to sign. When I got to the front, all that was left was a paperback copy of Time Flies (a Caldecott honor book in 1994). He drew a quick sketch on the title page of a dinosaur head poking out of quicksand and signed it for me. I'm not ever giving that book away but keeping it forever. However I will show it to my nephew and niece when they come to visit. They are too old for me to send them copies of the book, though... 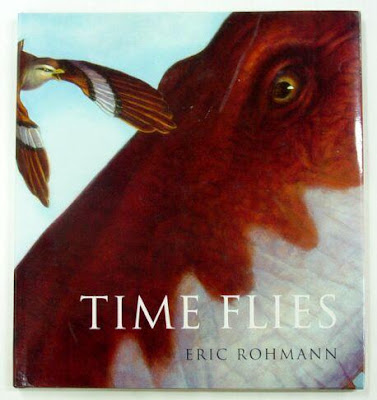 When I settled down to pore over it that night in my hotel room, I was astonished to find that the very first page showed a bird flying through the Field Museum's huge main hall into the prehistoric past. The illustrations echoed the old dinosaur murals of my childhood visits to the museum, and wasn't that Sue herself, alive and well?
Posted by Jenny Schwartzberg at 1:37 AM No comments: