The library where I work recently received a gift of a lovely collection of pop-up books published in the period from 1983 to 2009. I've been enjoying creating a detailed inventory of it and wanted to share some of the ones I loved with all of you.

Some funny and charming books are: 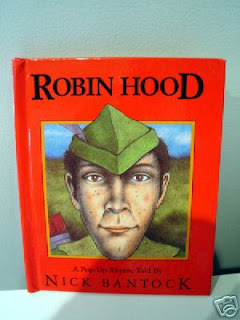 Bantock, Nick. Robin Hood: a pop-up rhyme. New York: Viking, 1993. As you read this book, you realize that there's something odd going on. Someone's playing pretend... I still smile at the memory of my surprise. 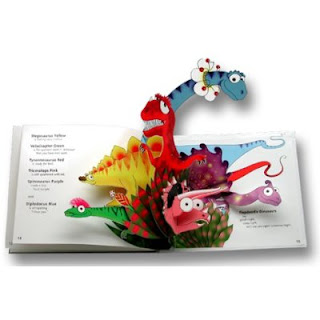 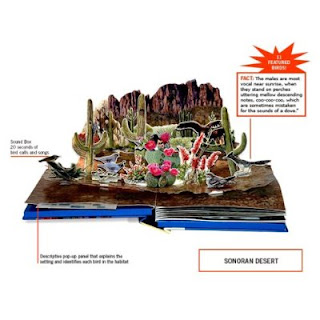 Chu, Miyoko Coco. Birdscapes: a pop-up celebration of birdsongs in stereo sound. San Francisco: Chronicle Books, 2008. This book simply amazed me. As you turn the pages, you see a landscape and hear the birds that you would hear in that particular region of the world. That's so creative and such a great way to get children intrigued with birds and birdsong and exploring the world! This book was developed by the Cornell Lab of Ornithology, a place I did not normally associate with children's books. However, a look at their website shows that they do a lot of programs to educate children and the general public about their work. 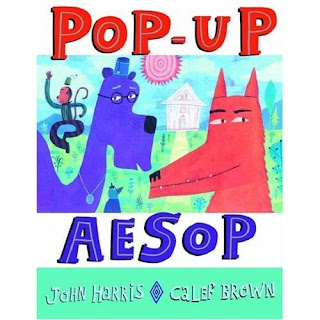 Harris, John. Pop-up Aesop. Los Angeles: Getty Publications, 2005. I was delighted to be able to read this in person because Seven Impossible Things Before Breakfast did a great interview with the illustrator Calef Brown recently. The interview is full of his wonderful illustrations and I had wanted to get my hands on an example of his work and here it was! I was surprised to see that it was published by Getty Publications. That's the publishing arm of the Getty Museum in Los Angeles. Not a publisher you would expect to be publishing children's books. Turns out Harris is a senior editor at Getty Publications, and has published three children's books through that imprint. This book is fun and Harris has picked some tales that are rarely retold so this is not an ordinary Aesop text, plus Brown's illustrations make for a delightful visual experience. 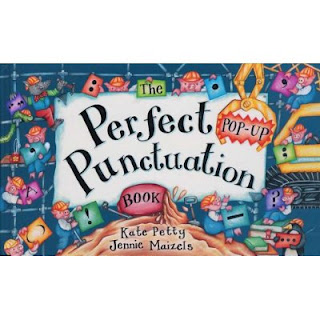 Petty, Kate. The perfect pop-up punctuation book. New York: Dutton Children's Books, 2006. This delightful book explains punctuation thoroughly. I need to review it carefully since punctuation is not my strong point. Much more fun visually than the children's version of Lynne Truss' Eats, Shoots & Leaves. Kate Petty did a number of other pop-up children's books, including The amazing pop-up geography, which is also in this collection. I was sad to find that she died from cancer in May, 2007. I hope her books continue to be sold and reprinted. They are wonderful. 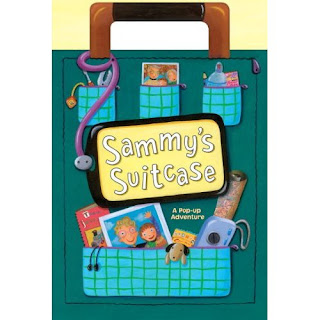 Rojany-Bucccieri, Lisa. Sammy's suitcase: a pop-up adventure. New York: Robin Corey Books, 2008. I enjoyed this tale of a young boy who goes off on the train to visit his grandparents. During the journey his amazing suitcase produces all kinds of tools to fix the adults' problems. Very funny and I think little boys will love it, and girls too! 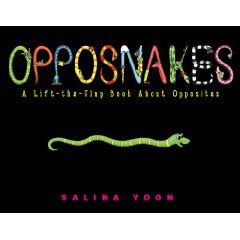 Yoon, Salina. Opposnakes: a lift-the-flap book about opposites. New York: Little Siimon, 2009. I loved this book which is very funny. The illustrations kept me smiling. This was a preview copy, and the book will be published in June of 2009. I definitely recommend it!

Now, I'd like to share some pop-up books whose design blew me away. The books above are fun, but they aren't high art. I think these really are art and will be appreciated for their design by all kinds of people as well as children. 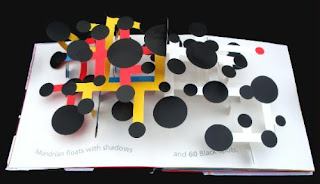 Carter, David A. 600 black spots: a pop-up book for children of all ages. New York: Little Simon, 2007. Carter does a lot of children's pop-ups, but for the last four years he's been doing some abstract and stunning pop-ups as well. A friend states that her young nephews love them just as much as we adults do. 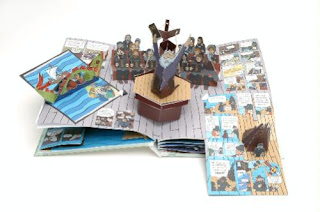 Ita, Sam. Moby-Dick: a pop-up book. New York: Sterling Pub., 2007. My library collects every single edition and issue of Herman Melville's books, so I've seen a lot of illustrations for Moby-Dick. This is a wonderful retelling of the tale. The pop-ups and illustrations are spectacular. Ita also did a version of Jules Verne's 20,000 Leagues Under the Sea (2008) which is also in this collection. I will definitely look out for more books by him. 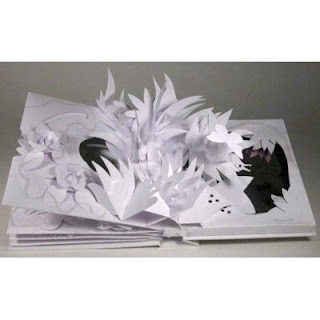 Pelham, David. Trail: paper poetry. New York: Little Simon, 2007. This book absolutely blew me away. It is fabulous. This was the first book that made me realize how much pop-ups are changing and how they really are art. Pelham also does more conventional children's pop-ups, which frankly did not impress me. I hope he does more pop-ups like Trail. 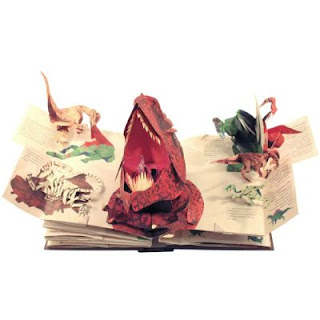 Sabuda, Robert. Dinosaurs: encyclopedia prehistorica. Cambridge, MA: Candlewick Press, 2005. Pop-ups everywhere under flaps, and springing up from center panels, as you can see in this image. Any child who loves dinosaurs will love this book, which is full of facts as well as images. I was astonished to see how much could be packed into a pop-up book. 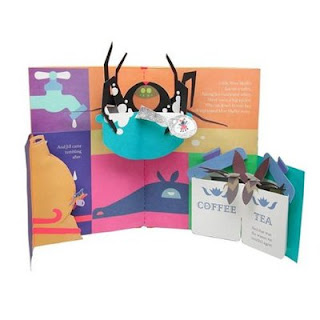 Sabuda, Robert. The movable Mother Goose. New York: Little Simon, 1999. I loved the unusual nursery rhymes and the images in this pop-up version of Mother Goose. Sabuda clearly had fun creating this book. 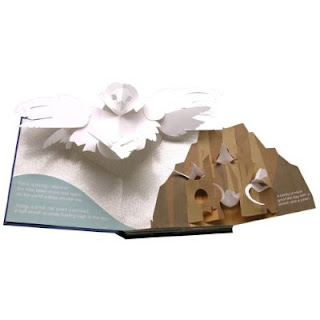 Sabuda, Robert. Winter's tale: an original pop-up journey. New York: Little Simon, 2005. Sabuda has done a lot of wintry pop-up books, but to my eyes, this is the most original. While the Christmas ones are quite wonderful, after seeing a bunch of his books all at once, I really liked the coherence of this tale, which is not just a collection of Christmas images. 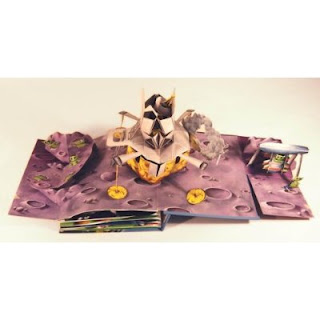 Santoro, Lucio. Journey to the moon by Lucio and Meera Santoro. New York: Little Simon, 2006. This just blew me away. How did they make these images three-dimensional? Plus, it tells a fun story of how you journey by boat, plane, rocket and finally to the moon. I wish I could have given it to my nephew when he was younger!


This is only a fraction of the collection that I had so much fun exploring. I urge all of you to go out and look at the pop-up books in bookstores and libraries. It's clearly a golden age for pop-up book design and illustration today. I'm just amazed at what they are like today. I certainly don't remember pop-ups from my childhood being like this!
Posted by Jenny Schwartzberg at 8:50 PM No comments: