Collecting Children's Books and the Internet

For years now, book lovers have mourned the loss of brick-and-mortar used bookstores as a major resource for discovering books, particularly rare and collectible books. For traditional book collectors this was perceived as a real loss, since they often learned about the importance of certain books they were interested in from book dealers, and about the differences between editions and terms such as good, fair, and poor condition. Other resources that are starting to disappear are the printed book catalogues sent out by book dealers to their clients, and journals that print articles of interest to book collectors. However, the rise of the Internet has meant that some of these traditional resources have shifted locations to the World Wide Web. In many cases this has been a boon for book lovers who have found a whole world of books opening up to them as well as entirely new resources that the Internet has made possible. This shift can be explored through an selective overview of the resources available online for the collection of children’s literature.

Many people begin collecting children’s books, either as children, or when they rediscover them as adults. Some choose to collect broadly, others to focus on award-winning modern children’s books such as those that have won the Newbery and Caldecott awards, or on comic books that they remember from their childhood. In many cases it is very difficult to locate brick-and-mortar stores that offer more than a few sporadic examples of these books. On the Internet, resources such as Abebooks, Vialibri, and eBay, as well as individual specialist dealers, offer a multitude of children’s books and comics for sale. However, distinguishing between good and bad dealer descriptions and judging what books to buy can be very difficult. Many book dealers on eBay and elsewhere post photographs of their wares to entice book buyers and to provide a substitute for examining the books in person. Reliable dealers generally state that the books are returnable if the collector is dissatisfied with them upon actual examination. 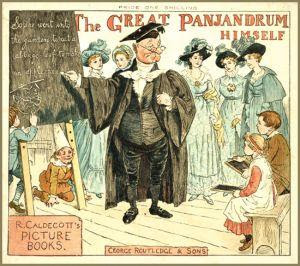 Once the collector has purchased the desired books, how can he or she discover how rare and unusual they are? WorldCat is now available in a public, free version on the Internet, although the listings are not as comprehensive as in the professional, paid version available through your local library, but it is still possible to ascertain how rare the book you are researching is. There are also resources on the Web for researching specific collecting areas. Often these have been created by collectors themselves or by collectors’ societies, such as the Randolph Caldecott Society in England which has an useful webpage on identifying early Caldecott editions. However, it was not detailed enough for my research purposes recently. In an effort to ascertain whether a gift to my library of some picture books by Randolph Caldecott were first or early editions, I sent an e-mail inquiry to a British listserv for the discussion of children's literature, asking who could help me identify early editions of Caldecott books. I was put in touch with the children's literature scholar, Brian Alderson, who informed me of a recent major publication by Tomoko Masaki, A history of Victorian popular picture books: the aesthetic, creative, and technological aspects of the toy book through the publications of the firm of Routledge, 1852-1893 (Tokyo: Kazamashobo, 2006; based on her 2001 PhD dissertation), which gives the details of the various reprintings of Caldecott and other children’s books published by the British publisher, George Routledge and Sons. Masaki's book is only available at six North American libraries, none near me, so Mr. Alderson generously reviewed jpg images of the books, particularly the publisher’s advertisements on the back covers, and confirmed that some of them were indeed first editions. Thus the Internet can enable collectors, scholars, and librarians to discover and communicate with experts in their areas of interest and to benefit from their knowledge. 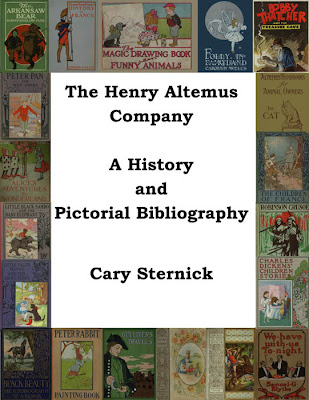 Research into some recent gifts of children’s books published by the Henry Altemus Company of Philadelphia led to the discovery of the Henry Altemus Company website, which is maintained by the collector and bibliographer Cary Sternick. He has published the standard bibliography of the company’s publications, The Henry Altemus Company: a history and pictorial bibliography ([The Woodlands, Tex.]: C. Sternick, 2005) as well as an earlier bibliography, A bibliography of 19th century children’s series books: with price guide ([United States]: C. Sternick, 2003). The website provides detailed information on the myriad printings and series published by Altemus, along with images of the covers for the different series, so that the viewer can identify the series his or her copy was published in through a visual comparison. If the information needed is not available, he will answer email queries through his Ask the Expert page. He also maintains a very interesting blog, Thoughts of Bibliomaven, where he posts images and historical information about books and ephemera from his collection of nineteenth-century children’s books.

The scholar and collector Pat Pflieger has built a website, Nineteenth-Century American Children and What They Read, based on her ongoing research into and collection of nineteenth-century American children’s literature. The website provides transcriptions of periodicals, articles, children’s books, children’s writings, and biographical material on the authors and editors of these works for the reading pleasure of anyone who is interested in nineteenth-century children's literature. For collectors and librarians who are researching editions and imprints in their collections, another resource is online at the American Antiquarian Society, their 19th Century American Children’s Book Trade Directory. These and other resources on the Internet enable the interested collector and/or researcher to benefit from a depth of knowledge and research resources that were not available in previous decades, both because of modern technology and because children’s literature is a comparatively recent collecting area. 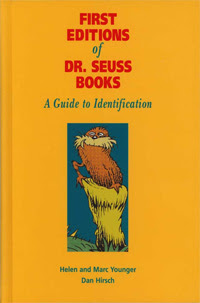 Not only collectors or scholars have developed bibliographic resources for the use of future researchers. Some major online book dealers specializing in children’s books such as Aleph-Bet Books, have ended up producing major bibliographies on children’s books for the use of collectors. A recent example is Helen and Marc Younger (of Aleph-Bet)’s bibliography, First editions of Dr. Seuss books: a guide to identification (Saco, ME: Custom Communications, 2002). Several websites and blogs provide information on identifying first edition points for children’s picture books, such as Children’s Picturebook Collecting, and Peter Sieruta’s Collecting Children’s Books websites. Bloggers like Peter Sieruta and Cary Sternick also provide thoughtful ongoing discussions of the history of children’s books, with opportunities through comments on their blogs to participate in the conversation.

In the area of comic book collecting, a recent article in the Wall Street journal by Susan Bernofsky, “Why Donald Duck is the Jerry Lewis of Germany: The cartoon character turns philosophical in translation; quoting Goethe,” surveyed the history of the comic book character, Donald Duck’s translation and publication in Germany since 1951, and the collecting community it has generated. The article sparked my curiosity about this children’s literature phenomenon and led me through an email inquiry for further information on the subject to a private collector. He informed me that the German collector’s group called D.O.N.A.L.D., mentioned in the above article, remains very active. It has its own newsletter, Der Donaldist, and a website. He also referred me to two websites on international translations of Disney comics, with databases and jpgs of individual issues. They are the COA I.N.D.U.C.K.S. database and the Disney Comics Worldwide website. A blog post at the latter website shows covers of international Disney comics in various languages and points out that while new Disney comics are scarce in the United States, they are flourishing abroad. Further exploration of the Internet retrieves far too many comic book collectors’ blogs and websites on various aspects of comic book illustration and history to discuss here.

This very selective overview of collectors’ resources on the Internet for children’s books and comics gives only a small taste of how wide-ranging collectors’ interests in the field of children’s literature can be. Their collections grow out of personal interest in the books they collect and are spurred by finding other collectors on the Internet. Personal communication with these collectors through their websites and blogs, as well as the perusal of scholarly articles located through specialist societies’ websites, conferences, and newsletters, generate further information and interest in these collecting areas. Through online bookdealers, eBay, and book search engine websites, it is possible for these collectors to obtain copies of the books and ephemera they covet. Collectors may still use brick-and-mortar stores that specialize in their fields of interest, as well as specialist bibliographies, but more and more they are relying almost exclusively on the Internet and its resources to build their collections.

[This was a short essay on book collecting for a recent class, and could only be a maximum of 1,500 words. I thought it was worth sharing as a blog and hope it provides useful information for my readers.]
Posted by Jenny Schwartzberg at 9:39 PM 16 comments: