Moribito and Other Thoughts 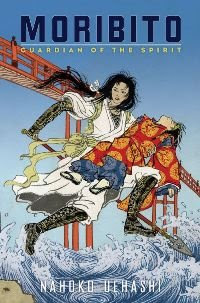 I was lucky enough to score an ARC of Moribito: Guardian of the Spirit, a book coming out in June 2008 from Arthur A. Levine Books, a division of Scholastic (thank you, Cheryl Klein). It bowled me over. It's a great story, not just for the fast-paced plot, but for the very human characters. Balsa, the heroine, is a bodyguard and is hired to protect the young prince Chagum, who is carrying a mysterious and mystical egg within his body, from assassins sent by his own father, the Mikado. This novel by Nahoko Uehashi was published in Japan in 1996 and sparked a 10-book series which has been translated into various languages. There's a Manga series and an Anime tv series in Japan as well. Now it comes to America and I hope it will be equally popular here. I love Balsa and Chagum and want to hear more of their stories.

Thinking about historical children's literature connections, what stands out for me is that this is a book from Japan that is poised to become a bestseller here. I confess I haven't followed Japanese Manga or recent translations of Japanese children's books, though I think I have at least one on my to-be-read pile somewhere. Then I remembered back to my childhood and my battered paperback copy of I.G. Edmonds' The Case of the Marble Monster and Other Stories (New York: Scholastic Books, 1966) and still in print through Scholastic as of 2000. I loved those stories about the historical Judge Ooka. 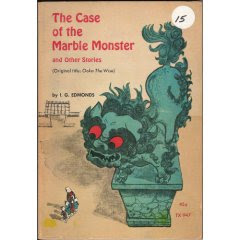 While Googling, I found that Judge Ooka also inspired a children's book series by Dorothy and Thomas Hoobler, the Samurai Detective series. Here's a nice interview with the Hooblers on the series. Now I will have to go find a copy of the first book, The Ghost in the Tokaido Inn (New York: Penguin Putnam, 1999) and still in print.

Japanese history and folktales inspired these American authors, and thinking back takes me to the late 19th century and the Japanese Fairy Tale series printed by Kobunsha in Japan, where Japanese fairy tales and legends were adapted for English travelers and for sale abroad. They were beautiful books. This blog has wonderful images from the books and links to other sites. For the collectors among you, I refer you to this comprehensive site. At least one book is beautifully readable at the Internet Archive, My Lord Bag-o'-Rice. Indeed other books from the series are also at the Internet Archive. These tales, told and printed in Japan, then translated into English and other languages and sold abroad presaged today's influx of Manga and Japanese children's books translated into English.

Turning back towards Moribito, what makes it so remarkable is that it not only draws on Japanese myth and folklore, albeit in New Yogo, a land inspired by medieval Japan, but it also showcases a woman warrior who is loving and caring yet a fierce and capable protector. It takes traditional tales, focused on male warriors and instead of inserting a female warrior who might as well be a male in disguise into the pattern of the tale, shows the reader a believable woman with thoughts and emotions that are definitely female yet strong. I love Balsa! I love the fight for right and justice that echoes Judge Ooka and other Japanese folk tales. More, more please! Dear Arthur A. Levine, do translate and publish the remaining 9 books of this series!


An additional note: Nahoko Uehashi, the author is an anthropology professor at a Japanese university and specializes in indigenous people. I remember Japan has its own indigenous people, the Ainu. This echoes the Yakoo of New Yogo who have intermarried with the Yogoese but whose traditions and magic weavers provide part of the solution to Chagum's situation in Moribito. I wonder how many other cues and hints I am missing in this book due to my ignorance of Japanese history and culture?
Posted by Jenny Schwartzberg at 5:25 PM

There's a actually an anime based on the first novel as well. I know that the word "anime" tends to throw people off a bit, but for me Seirei No Moribito (literally, Spirit's Guardian), was a wonderful show that spent more time focusing on the development of characters instead of being purely based on action or romance like other series. I wish that both the series and the anime were more well known, but unfortunately, that isn't the case.

I would highly recommend watching the anime as well as reading the book, as it is interesting to see how the events are portrayed visually. If you are interested, here is a link to the subbed anime (I have always preferred subs, as the video is made for the voice actors so it doesn't sound as awkward as it would if it was dubbed in another language).

Thank you for taking the time to write this review! I'm glad that there is someone else who appreciates this series, as it isn't very well known.